The kit ships with a set of replaceable nosepieces. The default nose piece comes pre-installed in the glasses and accomodates the largest number of users. The nosepiece selection guide should be reviewed to select the optimal nosepiece for each user.

Ear hooks are included for a more secure fit. The ear hooks are recommended in cases where the glasses may fall off or slip drastically from the user’s face.

Several cables are included and can be used to connect the AdHawk MindLink glasses to both the included Android device as well as a computer. The AdHawk MindLink glasses use a Micro-USB connector while the smartphone uses USB-C and most computers use USB-A. A Micro-USB to USB-A adapter has been included in order to transfer data from the smartphone to a PC.

The included cloth can be used to clean the lenses as well as the area inside the plastic frames. The cleaning cloth is reusable.

For additional information on how to use the various components included with the AdHawk MindLink kit, please review the additional documentation provided or see the AdHawk Microsystems Website.

The AdHawk glasses ship with several nose pieces which help adjust the seating of the glasses to each user’s facial structure. The instructions on selecting the correct nose piece can be found in Nosepiece Selection Guide.

The operating system should detect the device and load the necessary drivers. Once the OS has completed setting up the device, it is ready to use.

The AdHawk Backend Service communicates with AdHawk’s eye tracking hardware, and relays the eye tracking signal to one or more clients including AdHawk Hub.

The AdHawk Hub software provides all you need to interact with AdHawk’s eye tracking system.

Once the calibration process is complete, a dot representing gaze will be overlaid on top of the live camera image.

A simple way to evaluate the accuracy of the eye tracker is using the gaze overlay on top of the live view image.

The recorded gaze, video, and validation data can be reviewed in the Replay tab.

Labels and metadata can be added to the recorded data through profiles. Refer to Profiles in User Guide for more details.

Users who wish to implement their own data processing should be aware that the recorded data is divided into 4 files.

Timestamp: The time elapsed since the tracker was turned on represented as a float32 value

Gaze_X / Gaze_Y / Gaze_Z : The X/Y/Z coordinates of the estimated gaze point (combined binocular gaze data) with respect to the midpoint between the two scanners. The values are in meters represented as float32 values. See Gaze Coordinate System for details.

Gaze_X_Right / Gaze_Y_Right / Gaze_Z_Right : The X/Y/Z coordinates of a unit vector representing the right eye gaze with its origin considered to be the center of the right eyeball defined in the Gaze Coordinate System.

Gaze_X_Left / Gaze_Y_Left / Gaze_Z_Left : The X/Y/Z coordinates of a unit vector representing the left eye gaze with its origin considered to be the center of the left eyeball defined in the Gaze Coordinate System.

Vergence: The angle between the left and right eye gaze vectors in radians represented as a float32 value. This value should be within the range of [-0.017, +0.35] radians (corresponds to [-1, +20] degrees)

Frame_Index: The index of the video frame during which the gaze point was recorded, this is used for synchronization with the video data represented as an integer value

meta_data.csv: This document contains all the metadata belonging to that recorded session including user profile information and camera calibration details

Timestamp: The time elapsed since the tracker was turned on represented as a float32 value

Reference_Alpha / Reference_Beta: The ground truth version of the gaze data described above.

Timestamp_Sampling_Onset: The timestamp of the begining of the sampling for each target.

Session.mp4: This is the video captured by the AdHawk world camera. This video is captured at a variable frame rate, so it cannot be played back on its own. The frame index fields in the gaze data recordings (either projected or raw) can be used to synchronize the video frame with the correct elapsed time within the recording session.

The coordinate system used for the gaze outputs is centered at the midpoint of the scanners with:

AdHawk Hub provides the ability to customize the eye tracking experience for different users through the Profile option.

The following sections describe the tools and the workflows available for troubleshooting eye tracking problems.

Camera preview is not working or not showing the correct picture

If the eye tracking output is unstable or behaving erratically, the AdHawk Hub provides a set of tools to troubleshoot and eliminate the problem.

We recommend that you follow these steps under guidance from the AdHawk Support team.

The troubleshooting tools can be enabled in the settings dialog.

The Tune tab visualizes the incoming eye tracking signal and demonstrates how well the system is detecting the relevant features.

The eye tracking signals should be centered when looking straight ahead and should be free of noise on the edges of the screen similar to the example shown below.

Each detector is assigned a distinct color to identify its particular signals. PD1–PD6 represent the signals from the glint detectors. Pupil represents the signal from the pupil detector.

The pulses show the raw signal being detected by our eye tracking system. These pulses are shown as patterns of semi-transparent lines (each line representing a pulse).

The features show the processed eye tracking signal used by the calibration process. The center of glint and pupil features are identified using dots. The pupil signal (pink dot) also shows the ellipse representing the size and orientation of the pupil.

AdHawk’s eye tracking system provides several configuration parameters to optimize the eye tracking experience for different individuals. The Auto-Tune function automatically detects the optimal parameters for an individual by performing an initial scan of their eye.

When performing an Auto-tune, ensure that the user’s gaze is fixed directly ahead until the scan is complete.

After successful completion of the Auto-tune function, the eye tracking signals should appear centered on the screen.

If there are additional signals outside of the glint and pupil regions, the brightness of the eye tracking sensors may be adjusted to reduce the noise.

Pupil outline is not visible

The purple pupil signal should include the outline and the center of the pupil. If the pupil outline and center do not appear on the screen, repeat Auto-tune.

To report an issue please follow the following procedure

The AdHawk glasses kit ships with a set of replaceable nosepieces. It is important to choose the correct nose piece for each user in order to achieve optimal eye tracking performance.

Inserting and removing a nosepiece 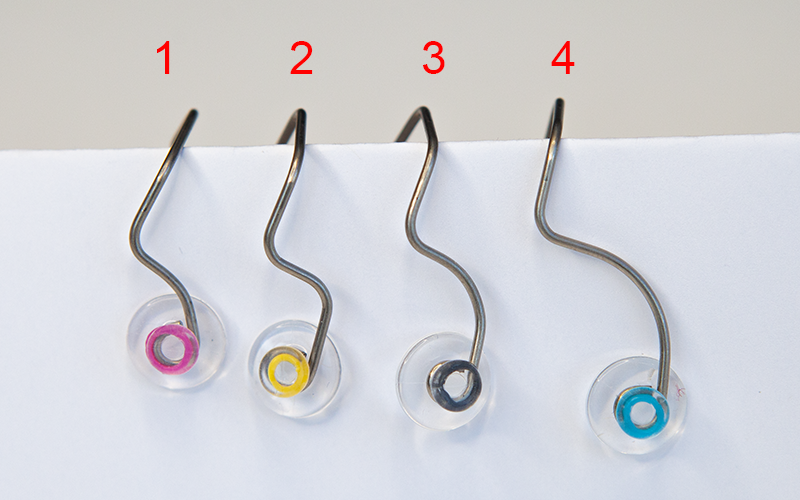 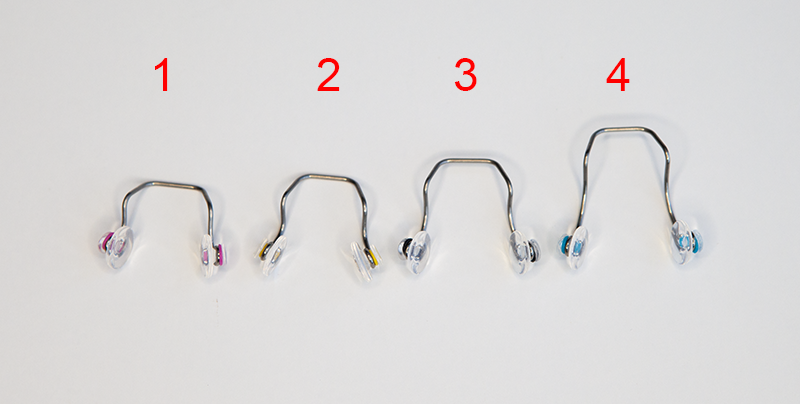 The nosepieces have been designed to accomodate different face and nose shapes to maintain a consistent glasses position relative to the eyeball. They follow the trend shown below:

In order to determine the correct height the pupil should be located mid-way between the top and bottom of the frame.

People of east-Asian descent tend to have shallower noses and a shorter relief from the nose bridge to the surface of the cornea. For Asian faces it is recommended to begin with nosepiece 4 (blue). A visual assessment of the side profile is recommended to see if the nosepiece needs to be swapped before a demo is attempted.

The AdHawk MindLink glasses can be used with either the included Android device or a PC. The AdHawk MindLink glasses use a MicroUSB connection and can be connected to each device with the included cables. The glasses ship with a micro USB to USB-A cable for connecting the glasses to a computer and a micro USB to USB-C cable for connecting them to the Android device. A USB-C to USB-C cable and charger is also included to charge the phone and an adapter is provided to allow the Android device to be connected to the computer for software updates and data transfer.

Removing and inserting the lenses

Remove one lens at a time. Place your two thumbs on the inner part of the lens pushing from the inside out while applying pressure on the tips of both your thumbs. The lens should pop out. Do not be afraid to apply pressure to the lenses, they are designed to be removed and will not break

The lenses must be inserted from the outside of the glasses. Hold the lens with your index and thumb finger to position the lens into the v-groove, starting from the side closest to the arm. Press along the bottom of the lens and glasses so it is fitted into the v-groove and do the same for the top side applying pressure. Apply pressure on the outer corners of the lens until it pops in. If it is difficult to properly seat the lens, it can be pressed down against a hard surface with a soft covering to force the lenses into the v-groove.

The inside surface of the glasses’ frame contains sensors for measuring eye movement. The interior glossy surface must be kept clean and free of scratches. The provided lens cleaning cloth may be used to gently clean this surface. Clean each day for best results.

A clip is provided on each of the USB cables. Clipping the cable onto an article of clothing is recommended to prevent the USB cable from tugging on the glasses during use.

Plug the cable into the glasses, place the glasses on your face, slide the cable clip along the cable to your preferred location and pinch the clip to affix it to the clothing. There should be enough room/gap between the clip and the glasses to allow the user to move their head freely without any tugging.